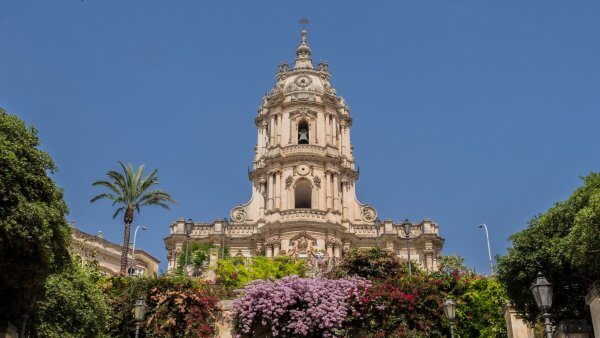 Among the white stone streets of south-eastern Sicily, the baroque style emerges and stands out among the façades of churches and palaces, a sign of a Eighteenth century-flavoured reconstruction.

Cities reborn under the rubble of the 1693 earthquake today mark the history and style of this era, showing themselves in a rich and majestic beauty. Through this short two-day tour, we trace back together the history of the most typically baroque city.

FIRST DAY:
Our day will begin in the splendor of the Sicilian nobility, in a castle at about twenty kilometers from Ragusa famous for the richness of its decor and the imposing structure: the castle of Donnafugata.

In a land of myth and legend, the story of this castle fits perfectly in the light boundary between reality and fantasy as early as the name: for many Donnafugata refers to Queen Bianca di Navarra escaped from the prison where she was forced; to others it would be a misinterpretation of Arabic “Fonte della Salute”, translated into Sicilian Ronnafuata. Whatever is the origin of its name, the castle is a splendid example of nobility and luxury, from its rooms to the famous labyrinth of the park.

We then will drive to Ragusa and its historic center Ibla.

On our way to explore the city we will visit the beautiful gardens iblei, the portal of St. George, St. Joseph’s Church, Piazza Pola and the Duomo, considered one of the most beautiful religious structures in Sicily.

Finally we reach Modica, the city of Salvatore Quasimodo, also famous for the particular chocolate. Among the main sights we will see Saint Georges’s Church, Saint Peter’s Church, Mary Of Bethlehem’s Church.

Then we will reach a cottage or hotel for dinner and overnight.

SECOND DAY:
Today we will know the city which excelled together with Athens in power and wealth: Siracusa (Syracuse).

We will relive the days of this ancient colony during the visit to the archaeological park Neapolis where, among its famous Greek theater, the Ara di Ierone II (Altar of Hieron II), the Latomia del Paradiso (Latomie of Paradise), the Roman amphitheater and the impressive Orecchio di Dioniso (Ear of Dionysus), we will dive into a timeless place, firm in history.

White stone alleys will accompany us along the route to Ortigia, where we will visit the Cathedral, built over an ancient temple dedicated to the goddess Athena, the Fonte Arestusa (Fountain of Arethusa) and all the major monuments of the area.

We’ll move then to Noto, Baroque jewel and World Heritage Site since 2002.

The city will disclose itself in the full splendor of its reconstruction, happened after the devastating earthquake in 1693: we will visit the church of Santa Chiara, the St. Nicholas Cathedral, Nicolaci street with its beautiful balconies, the Fontana d’Ercole (Fountain of Hercules), the Municipal Theatre and all other major architectures. Along the main street, we can also stop to do some shopping and to discover some of the Sicilian culinary sweet delights: cannoli (crunchy dessert with a sweet ricotta) or granita (frozen dessert).